Graveyard slot:  the one before people get food and drink

Lexicon of the people who run the planet

“Developing”: almost as good as growth

Metabolic rift:  Embodied creates are separated from learning the consequences of what we do

Can we heal the metabolic rift?

Soils are part of our makeup

Bioregion is a place we can appreciate, instead of the economy map

Landlording:  small connections of people reconnecting to living systems and the land

Philadelpha The Vanishing Point, water underground, restoring the river regenerating that used to be integrated

Farming as schooling, in Yorkshire

Urbanologyjeitinho:  Degree of social infrastructure that is self-organized

Ranulph Glanville:  Models of the world are not the world

You can’t know what it’s like to be old, unless you’re old

There’s a gigantic support ecology that doesn’t exist at all, it’s already there, e.g. families

Don’t talk about delivering things:  systems health is a property of a concept

Sketchnoting of John Thackara presentation by Patricia Kambitsch at https://twitter.com/playthink/status/524374724759916544 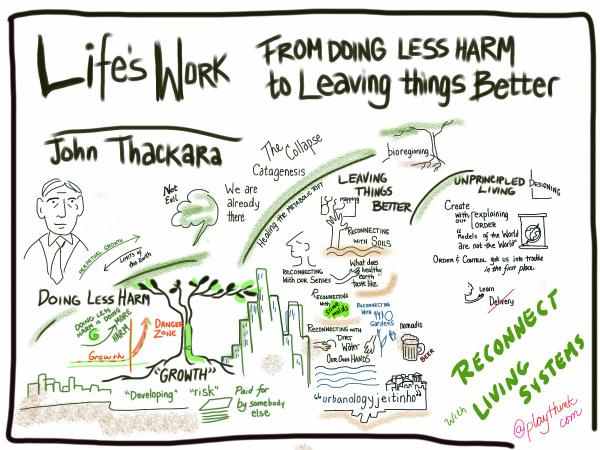