An attempt to take on systems boundaries issues

Professional work rests on boundaries:  what’s in, what’s out

Design method:  Gigamapping the way out, and the long trajectory of time

Seems to lead to more inclusive

In 2008, German zoologist:  Stable Disequilibria, The Ecology of the Future

Contrast of approach that gives primacy to process, rather than a single moment in town

Could keep some remnants, e.g. zoo

For whom are we designing?

Concept of normalism is an outline in architecture

Before these developments, different

Any mapping of processes become secondary to intuiting larger

Sketchnoting of Michael Hensel presentation by Patricia Kambitsch at https://www.flickr.com/photos/shagdora/15556508662 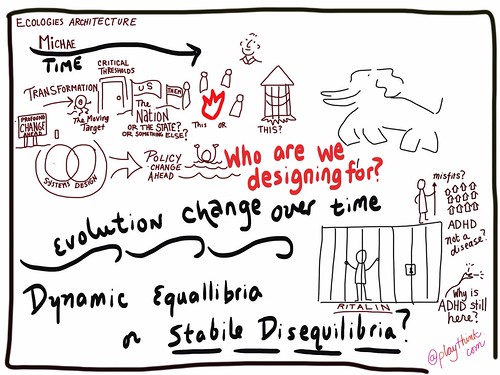