Start with disruptive innovations and sustaining innovations, from Clayton Christensen

Disruption of the music industry

Think of both as successful designs

U.S. Army taking design thinking, to deal with things that hadn’t dealt with before

Five forces is a bankrupt model

Music industry is a well-used example

Growth and drive by Google

What kinds of new behaviours are possible?

Uber:  controversial example of a business that is disrupting unwelcomed change in politics of cities, as well as economic relations in business

Killer business models: profit model at scale, changing over time, leading to be harmful to own customers

Need to disrupt some systems

Disruption could emerge between customers, between societies, insurgents coming along

Want to design for healthy ecosystems, at that scale

Sketchnoting of Alex Ryan and Michael Dila presentation by Patricia Kambitsch at https://www.flickr.com/photos/shagdora/14934910614 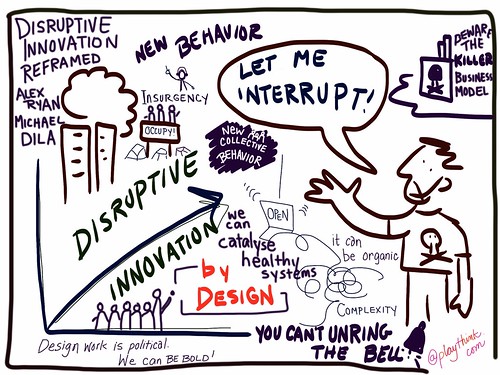