Harold is an architect, from which he has recovered

Will do a review / assessment of the symposium, but that would require more ground work than originally thought

Trying to move away from polemics

Prediction:  there will be a huge, dramatic change in design

Work with some of these people, excited at prospect

True believer of design, has taken over professional life

High hopes, not sure it will take over

Can’t divide systems out from design, can’t see it as two things

David Foster Wallace:  Fish asks “how’s the water”?  What the hell is water?

Philip Ball:  No one really understands water. … still a mystery

So, what the hell is systemic design?

Hear a lot of old habit brought into the conversation

Systemic design is an enigma

Anthropocene:  ought to be the design era

Science requires a change, a difference:  a process

Change of process is evolution

Change of evolution is design

How do I discover something in a dark room?

The metaphor of the elephant

How can we see the whole?

Churchman, The Design of Inquiring Systems

In designs, if someone agrees with you, it could be true

Collaborative inquiry:  everyone getting a piece of the action, putting things together

One of usual first steps is to end the inquiry:

At conferences like this, too many categories or disciplines

Was head of a graduate program in Whole Systems Design (one organizational, one whole systems design)

A play on Plato’s cave

Suspicion that what I’m looking at is a strange attractor

What protocols could be in place to allowed self-organizing shared behavior to emerge?

At funeral, found conversations as a way to keep bond in families, not mindless

Can use formal dialogue

Then what would be allowed if we had a graphologue?

An invitation to shared appreciative inquiry, so that we can begin to understand

In the design world:

Scholarship of agency and service

Evidence of supporting and advancing systemic design at RSD3? 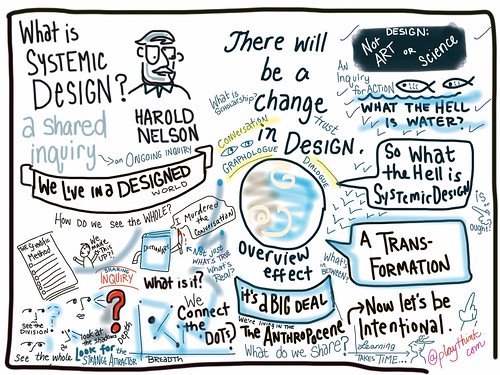