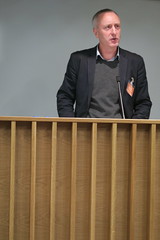 This digest was created in real-time during the meeting, based on the speaker’s presentation(s) and comments from the audience. The content should not be viewed as an official transcript of the meeting, but only as an interpretation by a single individual. Lapses, grammatical errors, and typing mistakes may not have been corrected. Questions about content should be directed to the originator. The digest has been made available for purposes of scholarship, by David Ing. 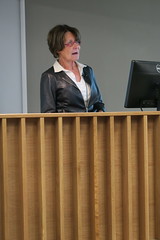 Will talk about work on finance

3 technological transitions in finance:  good this is a working conference, will discuss, they’re not finished

Over the counter market:  huge, foreign exchange between banks

Not regulated much, done in exchanges

People then had the market on tape

Transcript from Knorr & Preda 2007, from the days in which ticker tape was still used

Transition to scopes:  from piping to beaming

Master skiers say “You can’t win a thing with thinking”

Rise of algorithms that trade

Have had many flash crashes:

Is this an economic ritual?

In addition to infrapersons, have metapersons (an in between category)

If have meta-persons, market is no longer a flat transactional form 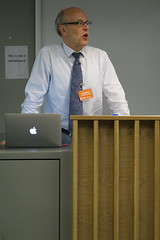 Screen went black an hour ago, because the talk changed

Conference theme:  shift from what technology means, to socio-technological appendices do

Applications of technologies are at the cutting edge

Question about algorithms, which has become important to trading practice

Bad day for market analysts.  Philosophical changes.  Are we controlled by algorithms?

Spoke to a metaperson about how to debug algorithms?  They change them all of the time, they don’t have time to really debug them?

Choice of wording to catch phenomena?  What metapersons?

Do algorithms have emotions?  They have rituals?  Flash crashes

Being controlled by algorithms

10 years of changes in language:

Do algorithms have emotions?

Collective agency could be a topic of investigation (not done here)