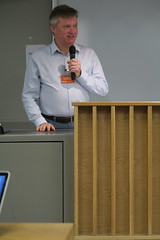 This digest was created in real-time during the meeting, based on the speaker’s presentation(s) and comments from the audience. The content should not be viewed as an official transcript of the meeting, but only as an interpretation by a single individual. Lapses, grammatical errors, and typing mistakes may not have been corrected. Questions about content should be directed to the originator. The digest has been made available for purposes of scholarship, by David Ing.

Title of conference: Beyond Interpretitivism? 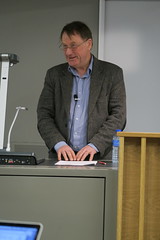 [A different talk from the composed publication in the proceedings “Thoughts on Movement, Growth and an Anthropologically-Sensitive IS/Organization Studies: An Imagined Correspondence with Tim Ingold” by Tim Ingold, Lucas Introna, Donncha Kavanagh, Séamas Kelly, Wanda Orlikowski and Susan Scott at http://dx.doi.org/10.1007/978-3-319-49733-4_2]

This talk has similarities to the Fondation Calouste Gulbenkian – Délégation en France lecture in Paris on November 30, “On not knowing and paying attention : how to live in a world of uncertainty”, for which there is an audio recording online.

Honoured by attention to anthropology

Some lines from T.S. Eliot, from The Rock

Wisdom has dissolved into information

There’s never been a time when we have more information than the present, and so little wisdom

Andrew Greig: sometimes the more you know, the less you see.  What you encounter is your knowledge, not the thing itself

Anthropologist:  understand things in their context

To see more, read or take counsel from the world itself

Science says we should collect data

Live in a world of uncertainty 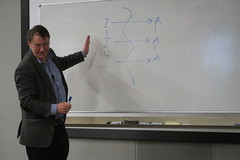 Go from point-to-point, but then lost

In a certain world that is joined up, nothing can live or grow

Chopping a log, as comparing to sawing through it:  axe versus saw

Walking along, every step

Pen as drawing, pushing out into the unknown

Because it’s a type of exposure, there’s an existential risk

Could tend to go for a walk, play cello, or intend to draw

Intentional model of action, cognitive scientists tend assume that cognitive tends to lead to send plans for action, followed by execution by body

Want to put that into reverse

Cast off into becoming, then skills and reaction kicks off

Lines of life, like growing roots, are always hesitant at the tips

We say of things, it appears

To imagine is to join upstream, in it’s birth

Merleau-Ponty:  I can see people, tables, chairs, in the world

Merleau-Ponty: the ecstacy of vision

Another word for imagination could be foresight

The line that cuts through, longitudinally, is the trace of gesture of a movement, not an intent

What leads is an imaginary longing that leads up to attention; what follows is a skillfully executed maneuver 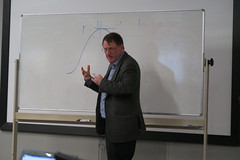 Already explained exposure, being pulled out of position

Education of attention, from ecological psychology from James Gibson

Masschelein and Gibson are giving points before and after inflection

In the moment, exposing self to the world, and am astonished by it

For normal science (and what scientists actually do) the way to know the world isn’t to open oneself in the world, but to put into categories

Indigenous people are astonished, but not surprised

Responsiveness goes along with the movement of things 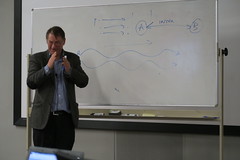 Lines of movement, going along together

Correspondence is different from interaction

Joining with, rather than joining up

When go walking, my agency isn’t given in advance, it emerges in the action itself

Reciprocity of vision:  I can’t see my face, I know I have a face because I have you looking at me

Walking with a friend

Attention is a stretch fraught with risk

Venturing from home:  this is what thinking is

Hesitant overflowing out of certainty

Are we prepared to task the risk of life, with frustrations?

Is the purpose of education to provide every child with essential humanity, or is the purpose to make possible a beginning to start life and carry on with a different awareness

Contrast between understanding and undercommoning

There are real problems, and fake problems

There is real freedom and fake freedom

Freedom to move, freedom to relate to other people

Freedom to correspond, go along with others

Temporary liberal societies, education promises freedom, but it immunizes us, protects us, so we can remain safe and secure, protected from existential risk of exposure

World is rich with possibilities 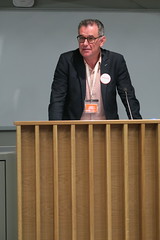 Be close to mike, session is recorded

Why is Tim’s work important? Point out echoes in other authors.  Practical, what does this mean for us?

Interest because was unsatisfied with attempts to use actor network theory ANT to do something interesting, different

Haven’t yet adopted the language

My walk walking me, Gerrard performativity, we’re both informed by walk and walking

Doctoral student who has read all of Tim’s books — how do they go about research?

How do practices of not knowing work in science, where we have to publish, present within genre of science where alongness and withness isn’t comfortable

Anthropology students have been reading phenomenology, then ask how to do field work differently, how to follow this approach, what difference does it make to ethnographic practice?

Question:  what do we do, given the power, cloud of prevailing institutions in the state, in big science, in education system, what do we do about it?

Maybe more scope in education that research for these ideas?

Methodology?  Getting away from being actor-centered, flow.  Methodological advice:  we worry about how people related to machines, it’s the people or the thing, Ptomely.  Walking together, instead.  Study on actors:  missed how action flows from one job to the next.  Figure and ground.

Seductive talk makes me suspicious.  Much corresponds to Heideggerian philosophies of process.  In talk, some recommendation.  #1 Better for social sciences and humanities, than natural sciences (as natural sciences observe, but then have technique, otherwise things wouldn’t work, they couldn’t just see the flows in life).  Drysophilia fruit flies stretches over generations of scientists, learned in apprenticeship, not lecturing.  Attempts by Habermas to say that social scientists and humanities are different, try to control the world.  #2 Good and evil?  Responsive messes to things that are in the market, to agents that aren’t there.  Carries on.  Visualization.  A market isn’t always good, it has a justification.  Markets can be quite evil.  Good or evil projection, or neutral?

How to enter into not knowing?  Psychology of ignorance.  Not knowing yet.

Cause-effect, centricities.  Anything other than matter of taste?

Am addressing principally social sciences and humanities, but don’t think we should have divisions with natural science

Freedom and opacity:  in the middle of thinking about this