Call him super-Hiro (as opposed to normal Hiro, the conference chair)

An architect, not a software developer

Not an expert on explaining Japanese spirituality, it’s part of being Japanese

Gauguin painting:  From where do we come from?  Where are we?  To where are we going?

You may not have religion, but praying for something, concentrating on it, without thinking yourself in it, then beauty comes automatically

By concentrating on the process, then beauty comes automatically

What Alexander found was patterns

Language is a complex way of expression

Story:  young mother threw newly born baby over the top of the hill, as tsunami chased right after her

Made a plan after 3 months, but bureaucrats said no. 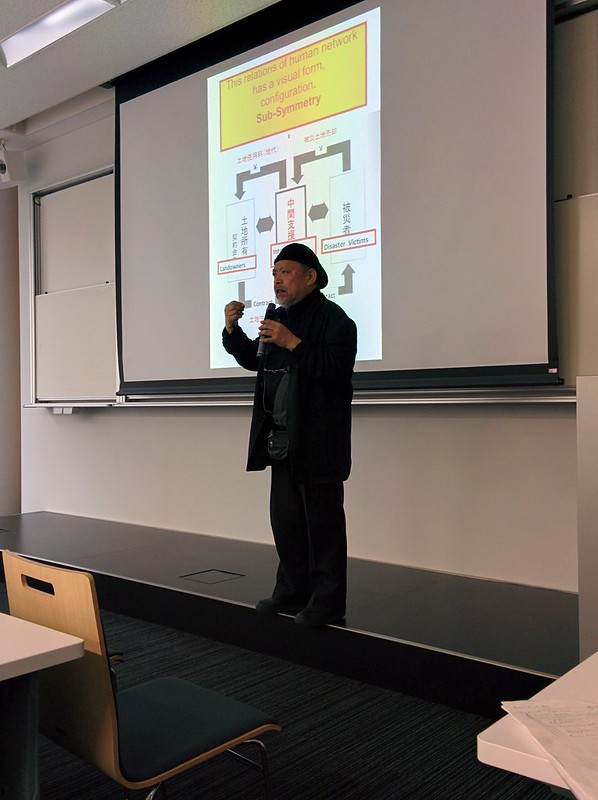 The relations of a human network has a visual form configuration:  sub-symmetry

They lack a vision

What is important is how to repair a life

Proposing a project language, as an intermediate aid organization doesn’t work, what should we do

In order to understand this idea, the center is useful

This idea of center is different from Cartesian

Good movies are made of several chapters or stories, but they are all correlated with each other

Each centering episode can be a project language

Patterns are selected for a certain vision, aiming at repairing the existing world to a world with life

In the book Battle for Life and Beauty, everything is a fight

Another diagram:  project language for goals

Centering process and making vision sounds difficult, but can imagine a reality with a strong message to change people’s motives

Photographs of houses and shops

In order to change the stream, it’s like a big river

Repairing the world requires effort.  How can we make bureaucrats see?

Make something that makes me feel?

Where can find more material on centers?

In the Battle for Life and Beauty of the Earth, would you describe that as a project language rather than a pattern language?